Friday will be my last day on this assignment.  Tomorrow is also significant because it will mark my ninth year of traveling in this job.  That’s an abundance of time and an abundance of miles.  It always brings me back to this concept of time.  I suppose I’ve written about it before, but it still baffles me.  Time can be so precisely measured and yet it can fly by or drag along.  This was a three month assignment that flew by so quickly and my very first trip nine years ago was a month long Germany rotation and it seemed to drag along forever.  I guess as time goes on and I grow older, it passes even faster and there’s no way to slow it down.

I use the image of an hourglass quite often in my work because it is an instrument of time…the sand on top representing the future as it hasn’t passed through the neck of the glass yet, the neck of the glass where sand passes through a narrow passage representing the present and the bottom of the glass where the sand rests secure and unmovable represents the past as it’s already passed through the neck.  It makes for great discussions of where we keep our attention focused.  Anyway, that’s another story for another time except that it came up on my recent trip to Dunkirk (Dunkerque) France.  After visiting the War Museum and learning more about the Battle of Dunkirk and WWII, I exited the museum to see a sculpture next to the building.  I found it interesting and very different, but I couldn’t grasp the sculptor’s message so I resorted to the written word next to the piece.  Sure enough, it was an hourglass.  What I really, really appreciated about the sculptor’s thinking was the concept that the hourglass represents among other things, the idea of hope…the reversal of fortunes.  I had never thought about an hourglass in that way before.  The concept was a priceless gem to me.

Walking the beach of Dunkirk and imagining the horrors so many people faced as they were trapped and the miracle of their evacuation over a few days, I could almost feel the emotions blow across my face like the sand and the wind that day.  I hope to get a chance to visit again all through that area of France and Belgium…there is so much history. 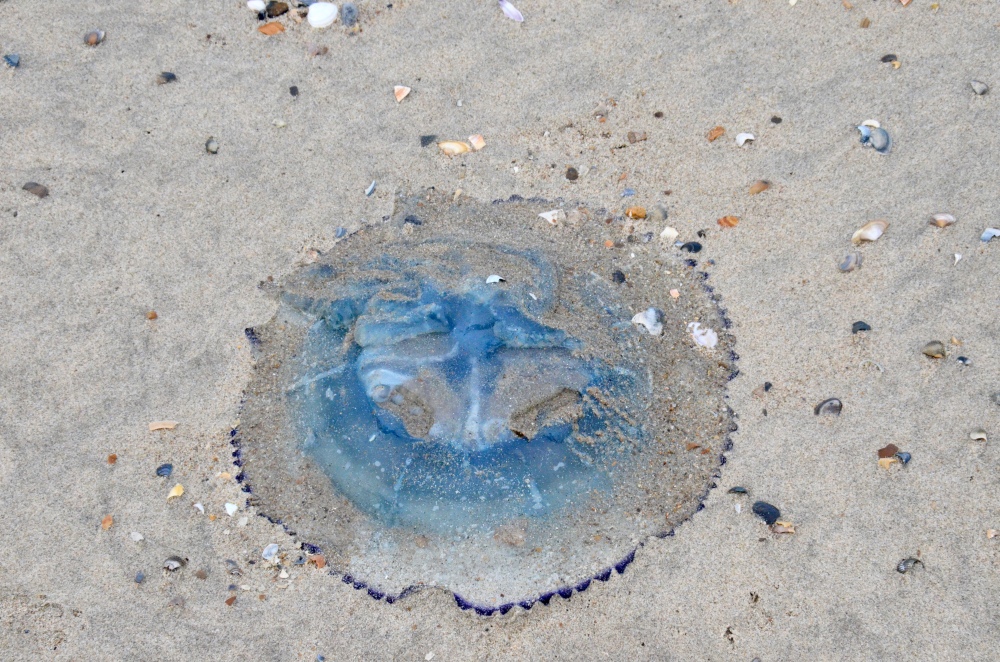 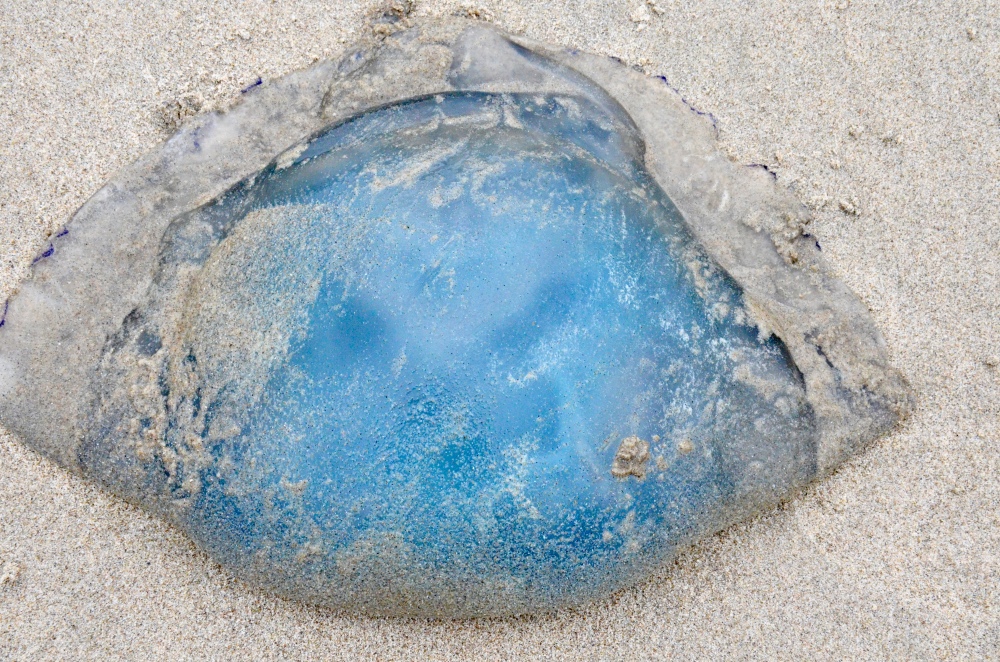 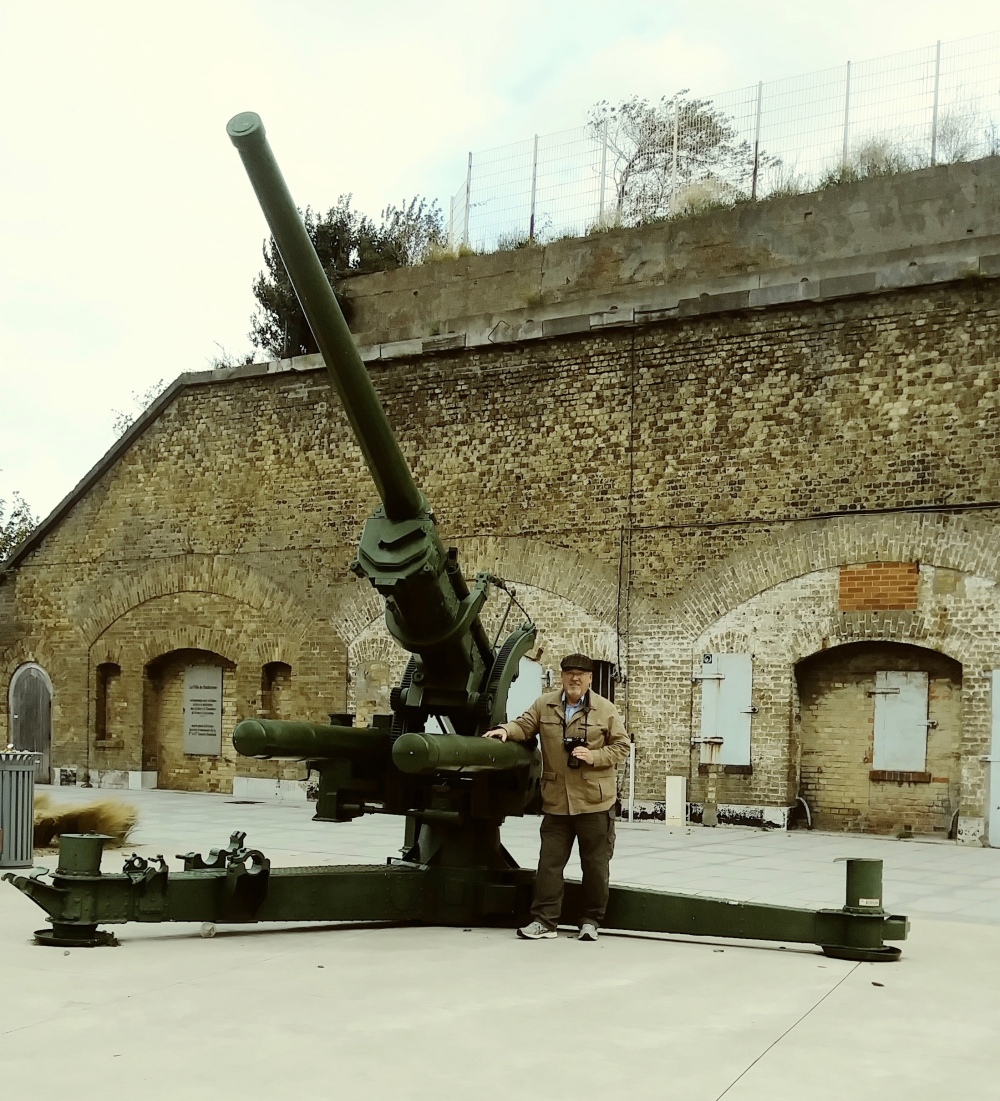 Walking across the beach that day, the wind was brisk.  It blew the sand along the beach floor in a mesmerizing pattern.  There were sea shells of all colors and beached jelly fish to experience along with the seagulls searching for something to eat.  The waves became more pronounced as the day progressed.  I was thankful for my tried and tested cabby hat with its earflaps.  I’ve worn that cap many times during the cold days of my time in Europe over the years.  Standing out there in the elements of the day, I became very aware of the sacrifices so many people have made throughout history in order to have a chance at a better life for themselves and their families…and it continues to this day.  Until the day I die, I will strive to never forget how the sacrifices of so many people have made my life better…

The next stop on my weekend journey was Brugge (Bruges), Belgium.  Brugge is famous for its canals and exquisite architecture, especially as it’s illuminated in the evening.  The fall evenings have become sharper the last couple of weeks, but inspite of the cooler weather, people were out walking, dining outside and enjoying this beautiful city.  I’ll never forget the haunting sound of a young man playing his cello in the old town center.  The look on his face suggested that he had an emotional connection to the music he was playing.  Oh, to have that kind of musical talent.  I enjoyed Brugge.  I must get better at my night time photography and accept that I need to carry a tripod at times.  The time in Brugge was way too short.  There were so many things I wanted to see, but time was limited.  I was able to snap a few shots and at least learn that I want to go back one day and spend more time. 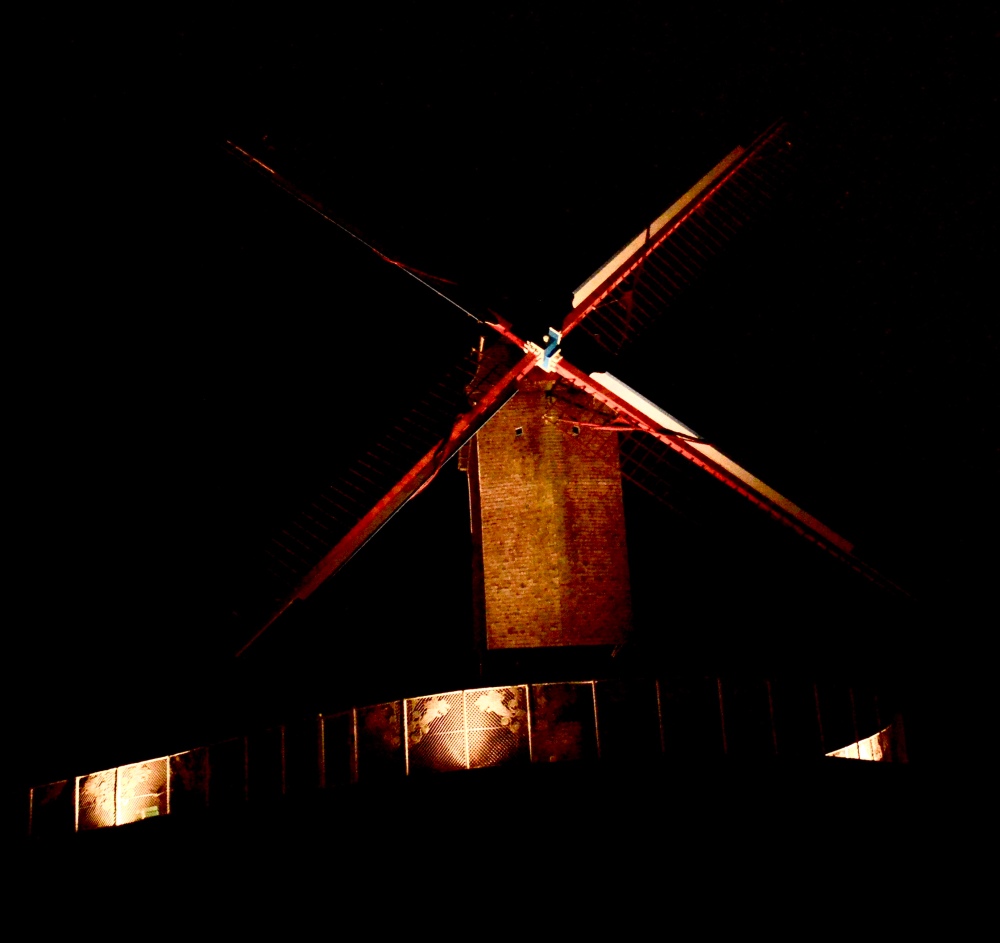 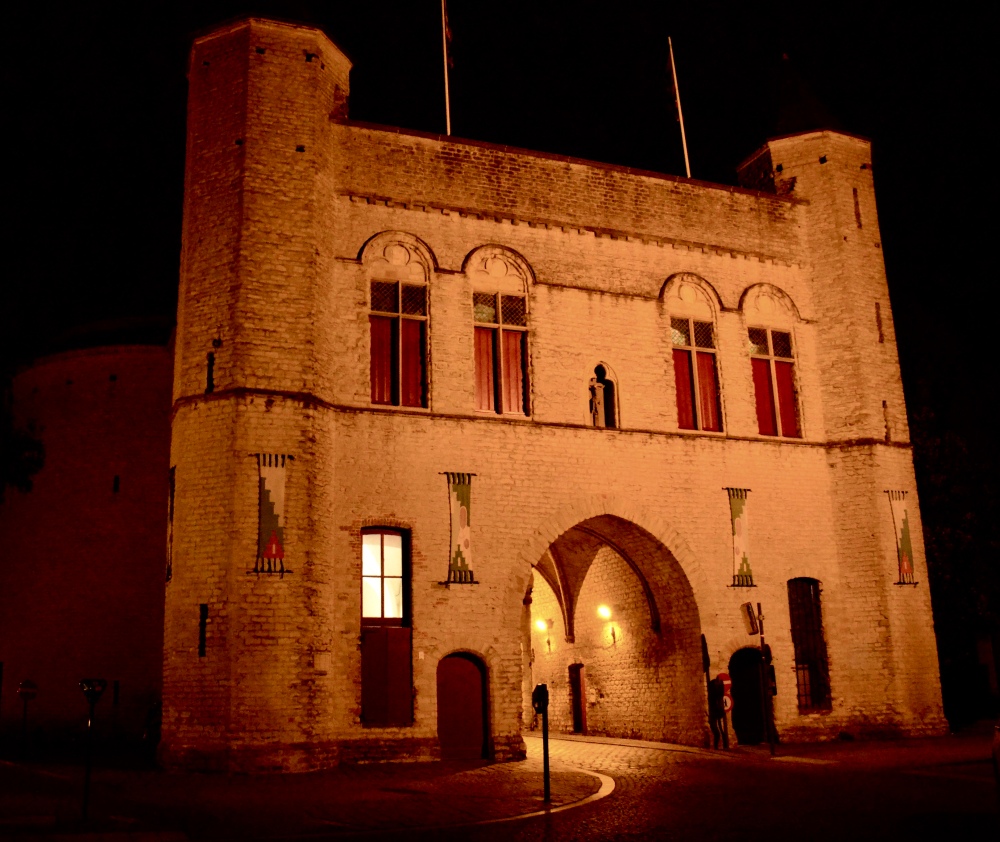 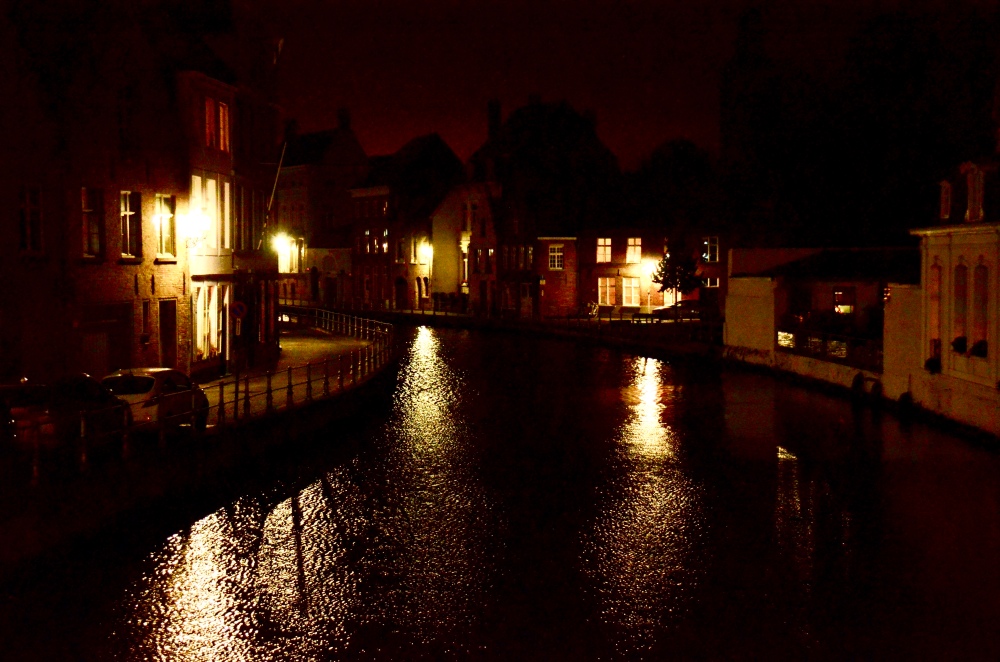 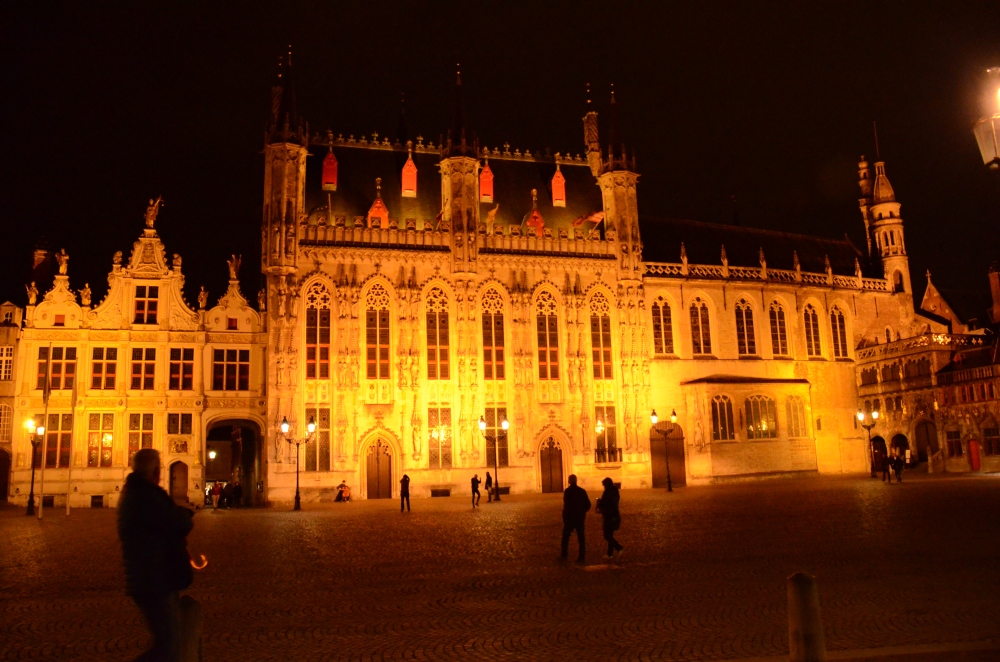 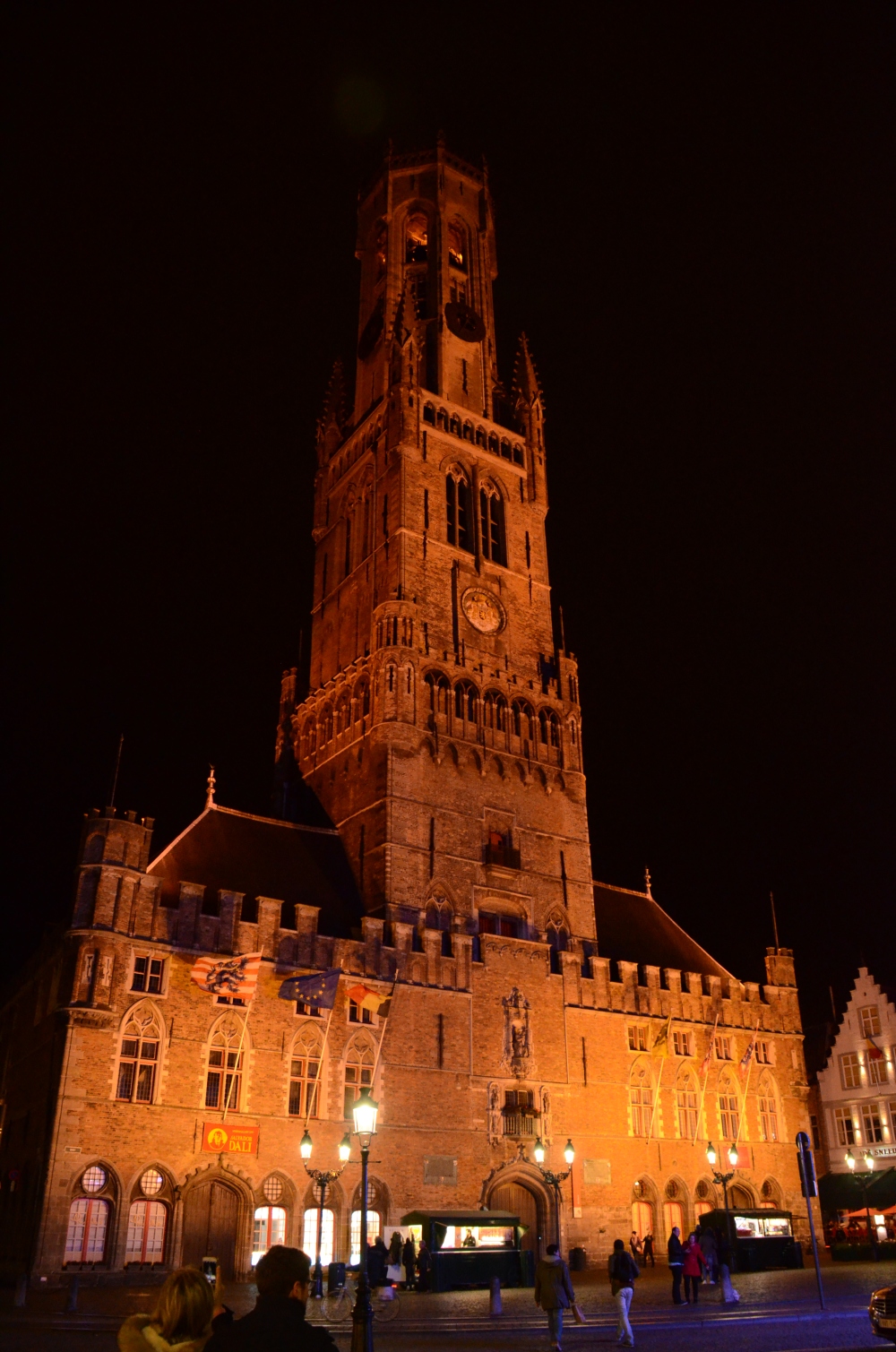 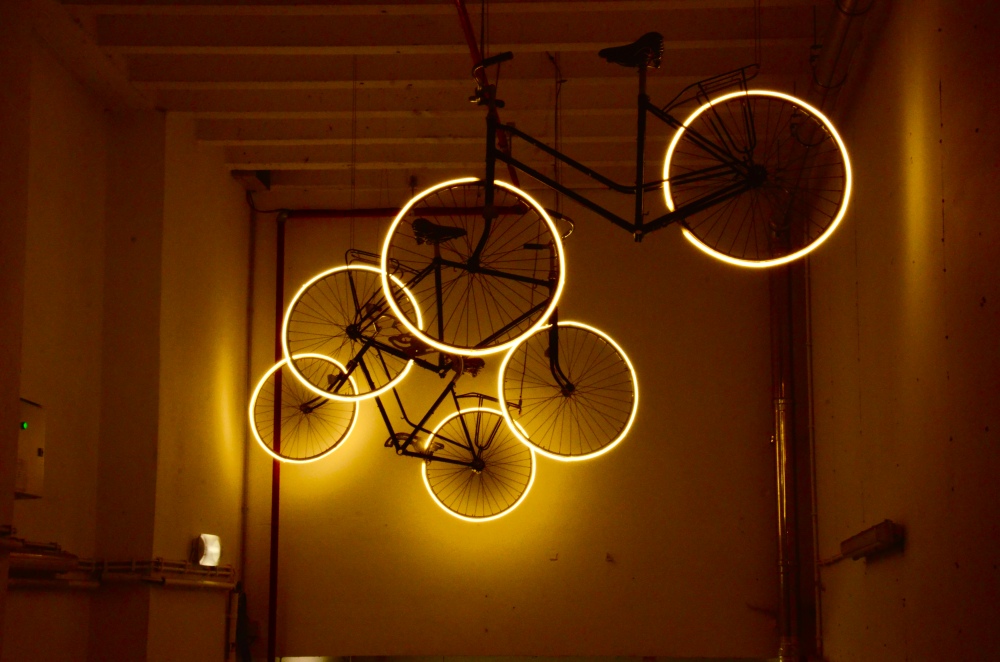 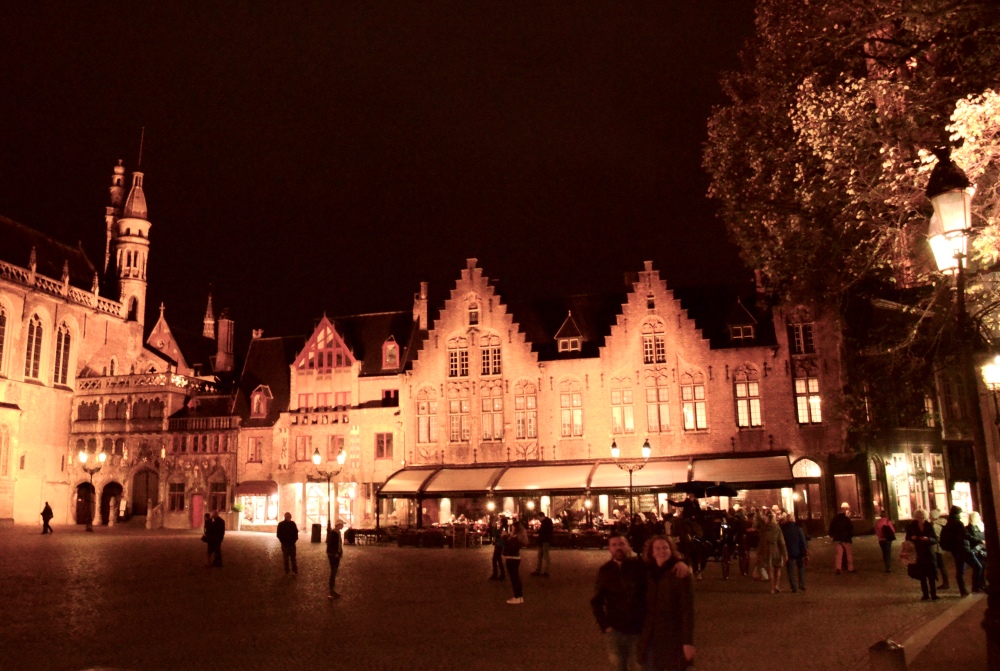 The final stop in this whirlwind, weekend trifecta was Brussels (Bruxelles), Belgium.  Like  other cities in this area of Europe, it’s history dates back to the stone age.  There are historic influences from the Romans, the Dutch and the French.  The city is bustling with shoppers and of course there is a high interest in the chocolate, the waffles and the beer. When you turn the corner into the city central area, the Grand Place, you have to take a second to catch your breath.  The architecture is literally through the roof.  Really, the best thing to do is stand in the middle of the square on the cobble stone street and slowly rotate around in a circle…very impressive city center.  When you go to Brussels, you park in one of the park and go lots outside of the city and take the subway into the city.  The traffic in Brussels is horrendous.  However, it is well worth the trip.  Again, it is another city that deserves more time than I could give it…perhaps another time.  One of the locals favorite places to gather and drink champaign is at the famous bronze statue of Menneke Pis, Little Man Pee.  The legend of Menneke Pis goes back as early as the 1451.  There are many legends that exist to explain the little guy.  Some say the statue was created to honor a little boy who peed on a burning fuse to stop an explosion at the city wall.  Another legend states that a little boy peed on a fire that was set to burn down the kings castle and put the fire out.  There are several more legends, but the bottom line is that this small bronze statue represents the working people of Brussels. He has been stolen many times and replaced a time or two, but for whatever reason, he is a part of the city and loved by all.  Tradition has it that he is dressed up on a regular basis in uniforms and other occupational garb.  You can find souvenirs of the statue all over. 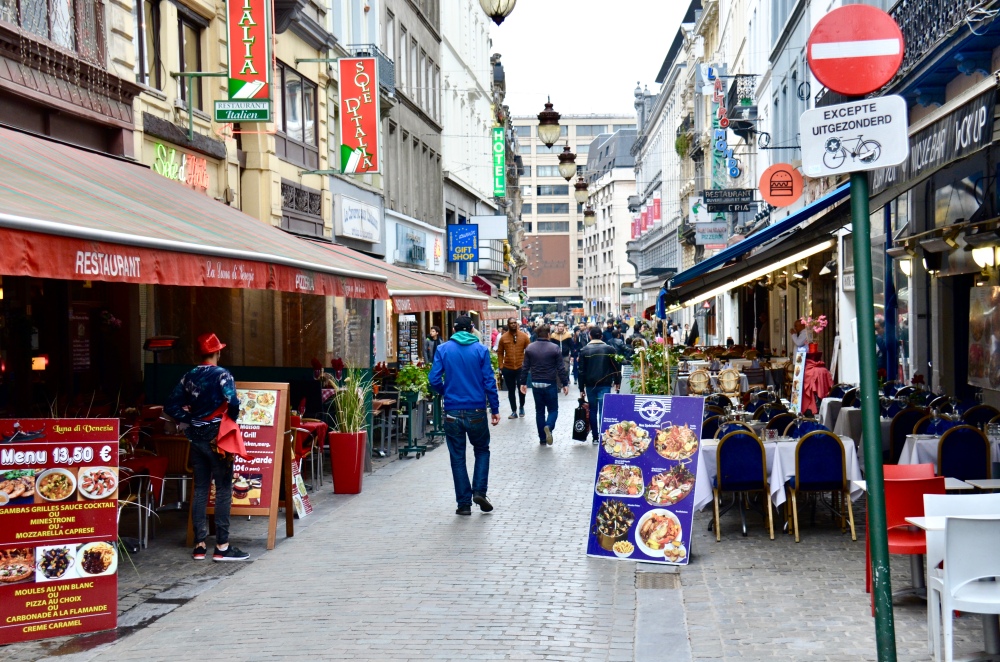 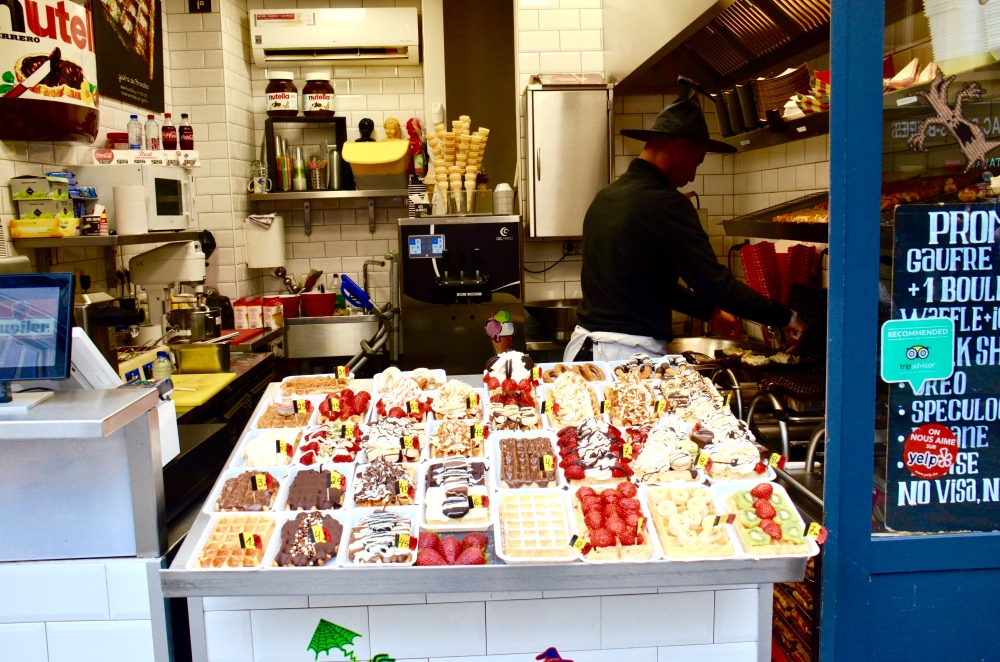 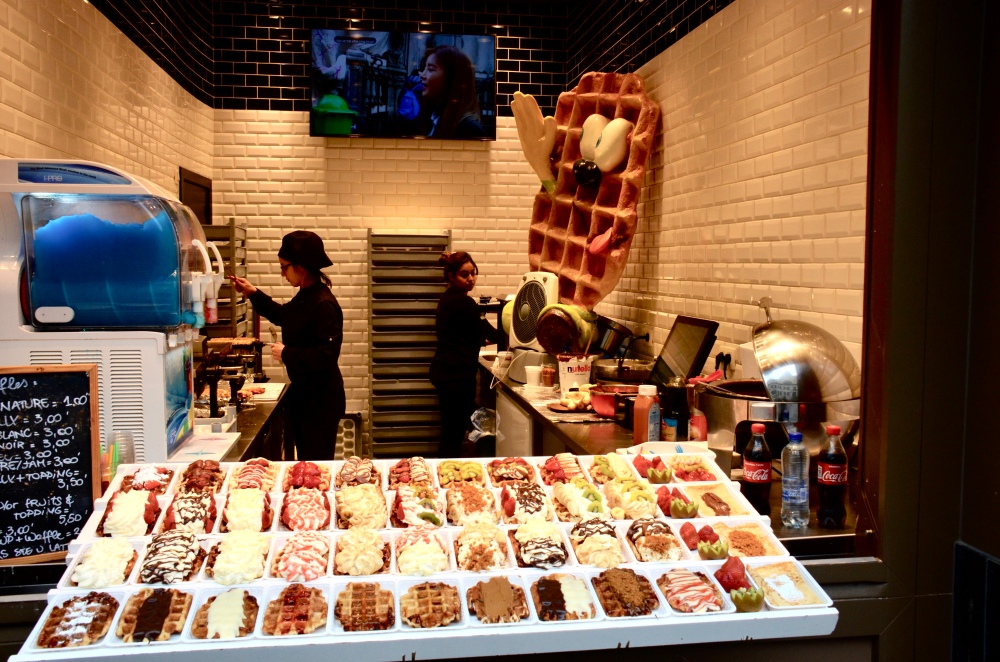 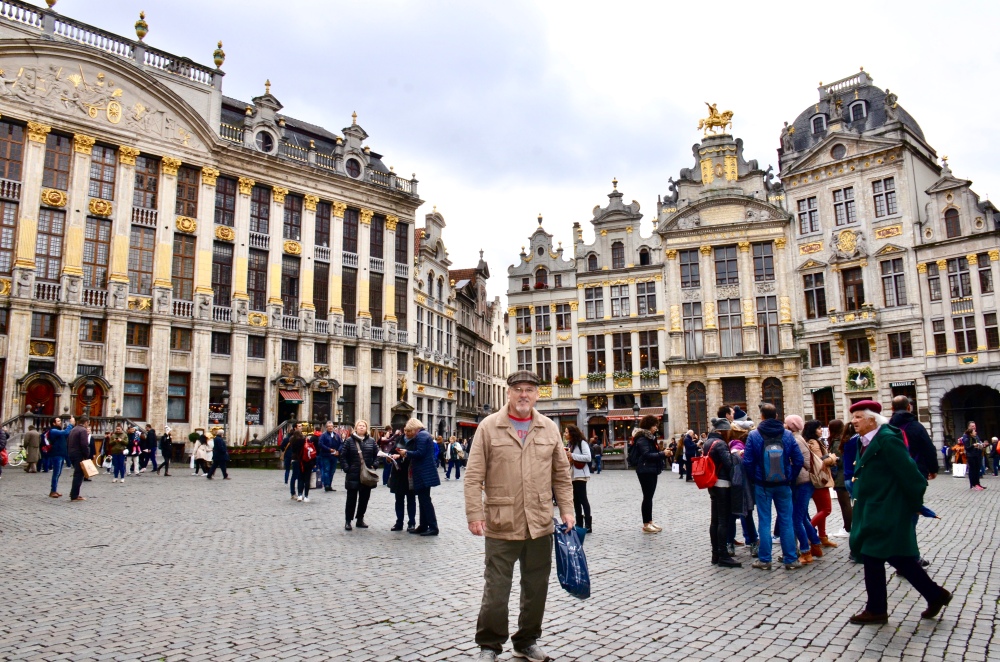 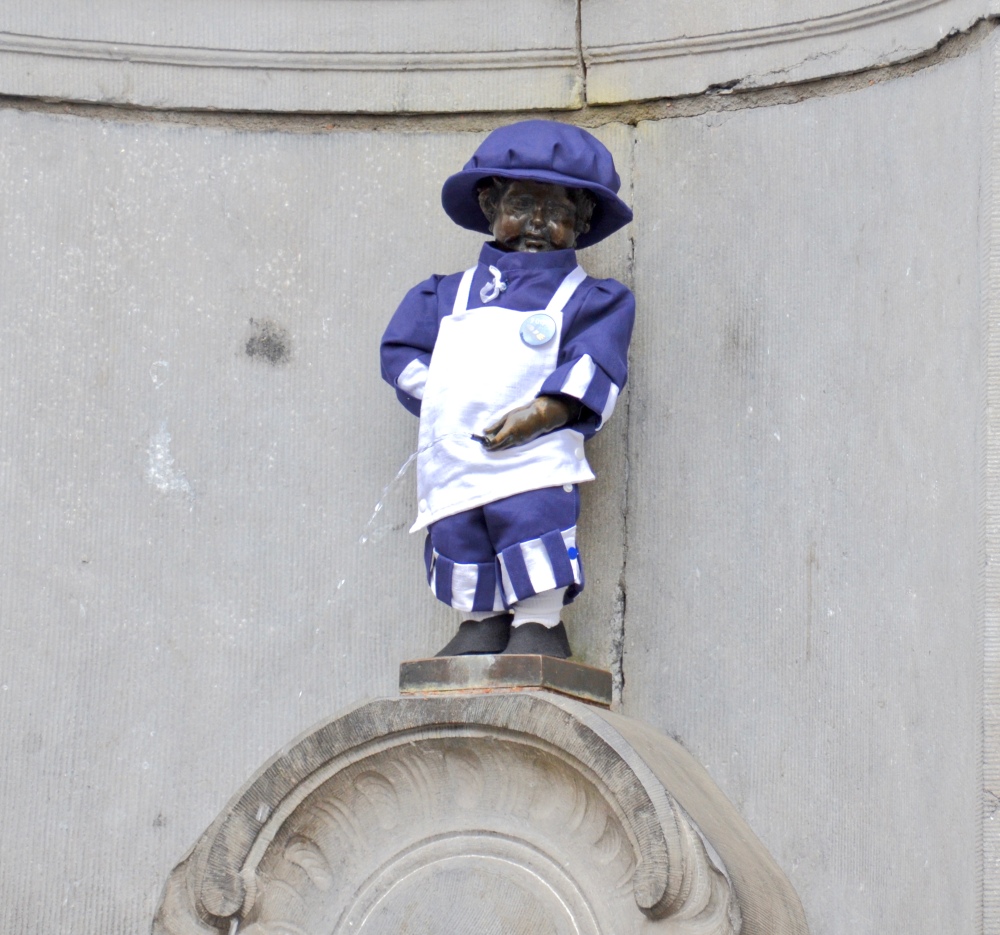 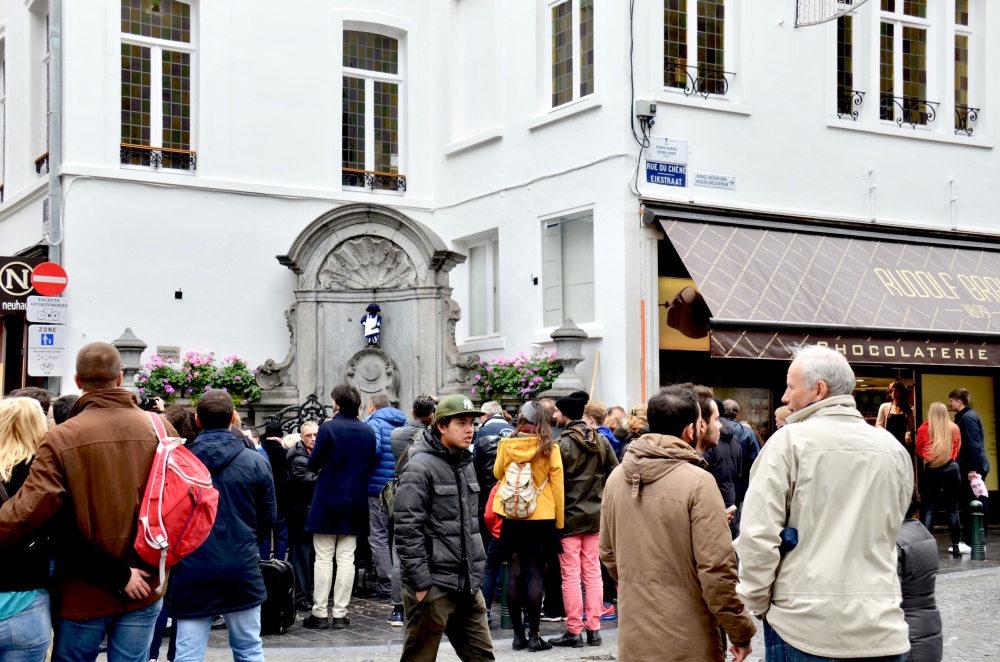 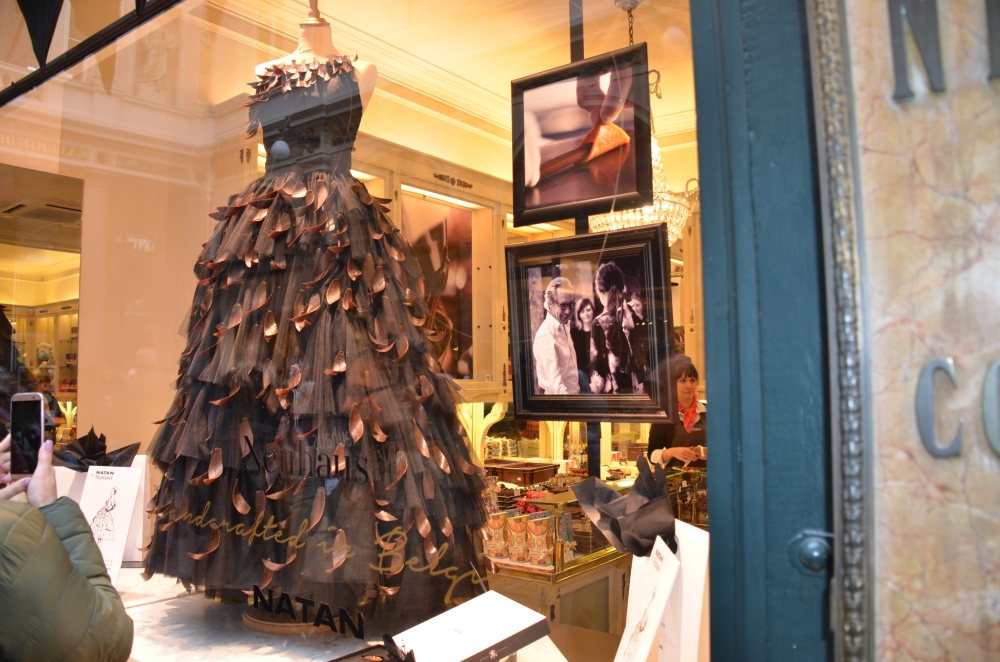 Whether its a small statue of a boy peeing or a chocolate dress in the display window, or a visit to NATO, there is always something unique to see in Brussels.  The emotional experience runs the full length of the continuum.  All I know at this point is that time passes quickly in Brussels, Brugge and Dunkirk.  May the tough times pass quickly and the good times pass slowly and if I don’t visit with you again before the holidays, I wish you nothing but joy this holiday season.

4 thoughts on “Dunkirk, Brugge, and Brussels…”